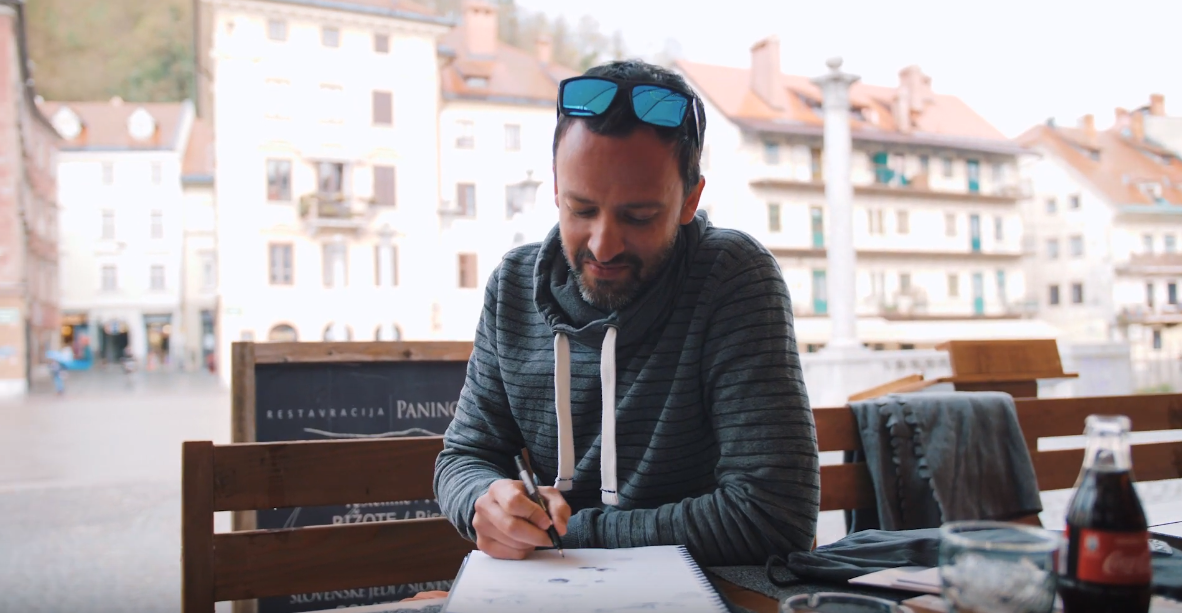 Take a deep dive behind the scenes with Greg Gorshich, the illustrator behind one of our best-selling books “The Adventures of Logan and Chloe”.

I’d have to say the Kitchen scene.  My sister and I used to share kitchen chores when we were little, and we’d imagine all these characters on cleaning products or cereal boxes coming to life and helping us with the chores.  So that made perfect sense to me.

But each illustration is special in its own way, since they all come from a place within me. Maybe the most personal one is “Take care”, since I as a child was also afraid of the dark.  I overcame that fear with the help of my family.

I spend most of my day wandering the city with my son, Jacob, looking for inspiration, and I do a lot of my drawing at night.  It’s a bit more peaceful, a bit quieter, so I can use the sketches I’ve drawn from the day and concentrate and flesh them out a bit more.  Once I seriously start working, I have to lock myself away from every kind of distraction.  I don’t eat or drink anything, I try to avoid bathroom breaks, and definitely no computers or phones.  That way I can get in touch with my inner creativity and really let that run wild.

I wasn’t really trained as an illustrator.  I studied printmaking at university, but I’ve been drawing since I was a little kid.  I didn’t take notes in high school or college, but doodled as a way to hold on to information.  But I really like to learn.  I started in digital illustration working with early cell phone games, but as that market expanded, I wanted to use my passion for drawing as a way to feed me and my family.  In order to be a good illustrator, you have to notice the tiny details in almost everything, and that was always how I was.  Watching leaves blown by the wind, or the waves on a pond.  I know that sounds poetic and kinda cheesy, but those are the things that really inspire me.  I’ve tried to make the illustrations for “The Adventures of Logan and Chloe” reflect those tiny details that I find so fascinating.

I really like to gather ideas from the other people at Hooray Heroes.  Everyone here is so creative, so I listen to their ideas and talk to them about things I like, things they might have in mind, and try to formulate how I want the illustration to work.  After that, I take a walk through the city, especially the museums, to get inspiration and filter through the stuff I’ve heard in the office.  Once I sit down at home, I get to work on the color palette mixed with the sketches I’ve done throughout the day, trying to add emotion, feeling to the idea I’m working with.  It takes time, but after a while, each of the characters begins to feel really a part of each of the stories.

The one for Climbing Trees!  I loved the vertical orientation in the book, so it was a fun challenge.  Also, I don’t know if you’ve noticed, but there’s a tiny Easter Egg in that illustration.  The heart with “M + R” is for Mic and Rado!  My agent put me in contact with them, so I thought I’d leave a little shout-out to them in there!

Oh yeah!  I have fun when I draw, so I love to put little hidden things in the illustrations.

I love to sketch with pen and ink or in pencil to gather ideas, but I’m mainly working digitally.  The process is very similar, but the mediums are just a little different.  Also, I can keep so many sketches saved on my tablet.  I don’t have to lug around 25 sketchbooks at a time if I want to work on something I did maybe 3 months ago.  Technology, man.  It’s great!

Heh, that’s a good question! The longest I’ve drawn for, and it’s become almost a rule, is 8 hours.  I really can’t do more than that.  Afterwards, it isn’t just my fingers, but my back, my neck, and my brain!  I have to stay focused, but my mind does wander.  Once I’ve lost my train of thought, I might as well just stop for the day as it isn’t getting back on track.  I’m not really such a disciplined person.  Like, I don’t keep to a strict schedule, so when I sit down to work, I have to really be 100% in it.  Otherwise the sketches are just doodles and they don’t really develop.

It isn’t so much that I have a favorite thing to draw so much as I love to draw different things.  Each illustration was so different, and so that the customers could have so many choices, I loved that challenge.  It’s almost like reinventing yourself with each new illustration.  Some needed a darker color palette, others needed to be a bit more bright, so to have all of these different challenges, I really enjoyed that diversity.

I wouldn’t say any one of them was particularly hard technically, but illustrations with that have more elements and details are the hardest. Climbing Trees and Kitchen are just like that… by far the most complex is the “outro” scene, where our two kids are photographed several times in different events. It’s hard enough to draw each one of them once, with all the options, but doing it several times…woof, that’s hard 🙂

That depends on the illustration. Some are quite quick, some take a long time before we find a good solution and they’re ready to be finalized. I say WE because the initial concept is always a product of many people involved in the creative process. After the confirmed sketch, it takes a day or two to draw the background and then a couple of days for the characters usually.

The biggest challenge was the personalization of the characters and their universal look. Even though we strive to give the customer the most choices to pick from, it’s understandable that it’s almost impossible to cover them all. So I tried hard to make the kids as universal as possible and cute at the same time. 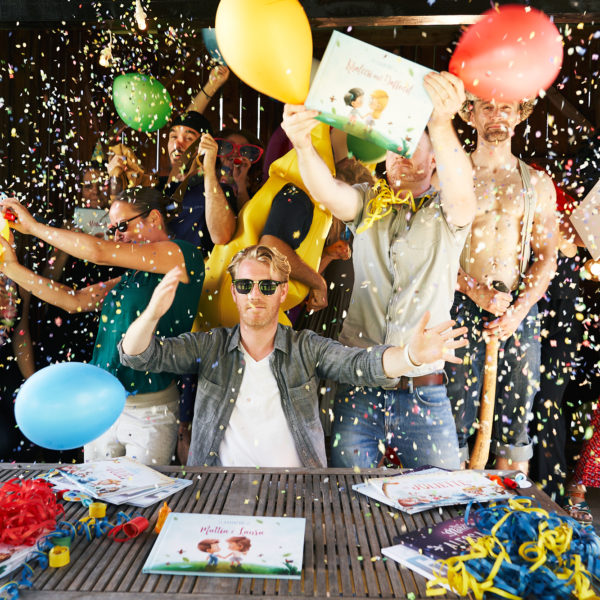 How our books are made 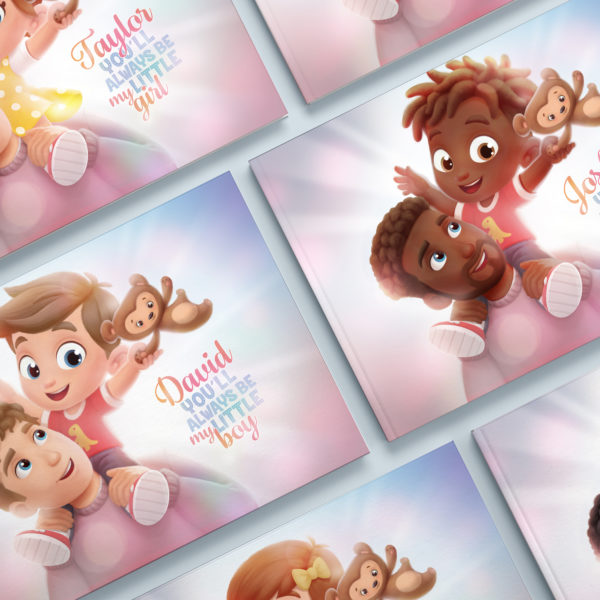 New Book For Daddy and Kiddo from Hooray Heroes 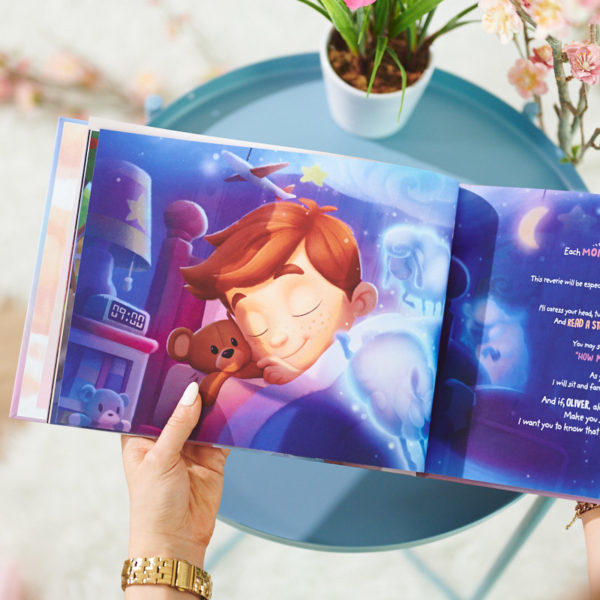 Nostalgia Tickling Children’s Poems Loved by us at Hooray Heroes